It’s one of Perth’s newest restaurants – and it’s already making its name not just for the unique dining experience, but also for the vibrant and exotic interior. Hippo Creek African Grill in Subiaco is all about open fire cooking – wood-fired char grill – which harks back to nomadic hunter gatherers. And as part of the interior design, the South African restaurateur wanted an open fireplace which was in keeping with the theme of Hippo Creek.

“Back in South Africa, our client used a barbecue called a braai,” explains Mike Booth from Bremick Design + Build. “South Africans love meat cooked with flames and charcoal. It’s why they wanted to use fire at the entry of the restaurant to really set the scene.”

The client’s brief was to create a modern African restaurant which, above all, had a wow factor. Having already seen and liked the entire EcoSmart Fire range, they decided an open fireplace would be an ideal fit.

Three Ecosmart Fire burners were incorporated into a 20-gallon barrel which had been cut in half, welded together and braced to hold toughened glass panels into position. Black river stones were placed around the burners and Axolotl paint was then used to make the fireplace look rustic.

“We wanted a high, colourful flame which could be contained (for safety reasons) and at the same time be highly visible, and be a big attraction,” explains Mike. “Bigger is better! The burners achieve that and provide a wall of flame across the entire fire pit.

“EcoSmart Fire pretty much ticked all the boxes. We didn’t need to look anywhere else – we found exactly what we were looking for.”

There were a number of other benefits of using the EcoSmart Fire Burners: “Simplicity, ease of installation, the high level of technical information,” Mike adds. “We were more than satisfied.”

“We use [EcoSmart Fire] as a point of differentiation for a client’s dining area, depending on the style and theme of the restaurant.” 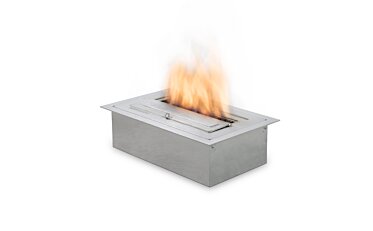 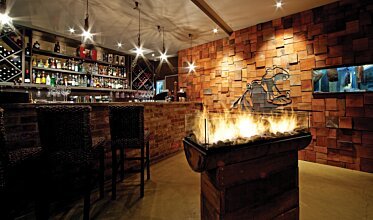 Get to know Gin 90 fire table

The elegance of a glowing flame fused with the broad functionality of a spacious table is the hallmark of our latest design.

Transparent glass on the corner of this EcoSmart Flex Firebox enables interior designers, homeowners, architects and builders to customise their fire solution according to a specific floor plan.

Located in Times Square, in the heart of New York City’s theatre district, it made sense that the centrepiece of the Paramount Hotel lobby be somewhat dramatic.

Transforming a traditional wood fireplace into a contemporary, eco-friendly bioethanol fireplace is simple with the EcoSmart Fireplace Grates.

Specifying an EcoSmart Fire? In this extensive document, you'll find all of the details related to design and installation all in the one place.

The essential guide to fire pits

We’re enjoying and investing in our backyards and the outdoor spaces of our homes more than ever before. We’re also embracing the outdoor fireplace trend – and fire pits are helping rekindle the spark!

4 ways to customize your fireplace

Design a custom firebox, flame to flame, take it off the wall, forego the firebox. Custom designs take the fireplace to the next level.