It was recognised as Australasia’s leading business hotel at the 2010 Annual World Travel Awards, and in recent times the Westin Hotel in Sydney has added a touch of ‘home’ with the opening of its new Lobby Room, a private retreat for business travellers.

Interior designer Joseph Pang wanted to create an atmosphere akin to being in your own lounge room, which he has achieved through chocolate hues and robust textures.

A key feature of the space – and the main focal point for the central sitting area – is its open fireplace, created using an EcoSmart Fire BK5 Burner with stainless steel surrounds and a toughened glass screen.

The indoor fire has been set into a special feature wall, with black gloss, random sized ceramic tiles. Flanking the fireplace are specially positioned round mirrors, with two lounge chairs situated either side of the fire.

“The fire is safe, reliable, contemporary and elegant.”

The design firm also chose the BK5 Burner for its ease of maintenance and because it’s operated by bioethanol, perfect for its location within the high-rise hotel.

Additional Lobby Room design features include intelligent lighting, contemporary decor and a commissioned portrait by artist Juan Ford, a finalist for a past Archibald Award.

The new Lobby Room was part of a refurbishment and extension of the hotel’s Lobby Bar and Lounge. According to Rebecca, the complete look needed to project a stronger sense of identity whilst maintaining the hotel’s five-star image, particularly in light of the numerous new and trendy venues which had opened in the vicinity. The brief was for a space that was intimate, sophisticated and energising.

The bar was extended into a space that was previously used for retail, which allowed additional and much-needed seating. Specially positioned glass doors enable the Lobby Room to be closed for private functions or to create a more intimate space for drinks.

To unify the Lobby Room with the urban sanctuary of the Lobby Bar and Lounge, the look and feel has been blended together so the scheme of the three areas flows into one. 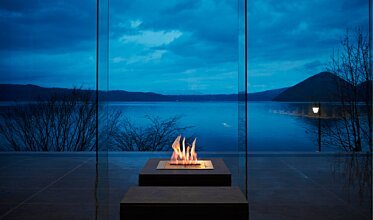 Choosing between ethanol and gas

Choosing between an ethanol or gas open flame fireplace? See why ethanol provides a better solution.

25 Reasons to choose Flex Fireplaces versus a gas fireplace.

Classed as the most premium wood on the planet, Teak is extremely durable and the preferred staple for outdoor furniture.

Fire: an element that has been around since the dawn of time and has always held a certain quality that draws us in. However, our modern relationship with fire has become a little more complicated - used more frequently now for creating ambience or a design focal point than being a crucial factor in our survival.

All you need to know about Flex

Beyond warmth and ambiance, Flex Series creates a luxurious focal point, adds character and interest to the room, and helps define layouts and use of space.